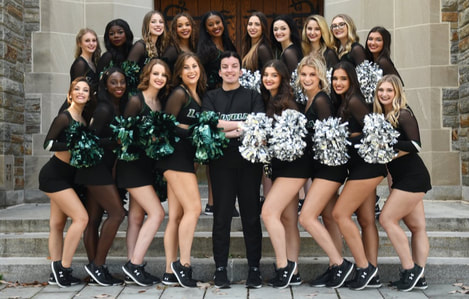 The primary mission of the Loyola University Maryland Dance Team is to function as a spirit support group, and represent the University, Department of Recreational Sports, and Athletics in a positive manner.

The Loyola University Maryland Dance Team performs at all home men’s and women’s basketball games in addition to making numerous appearances at other athletic, campus, and community events. Members of the team are required to attend NDA College Camp in August each year. Additionally, we may compete regionally or nationally depending on the team's interest and available financial resources.

We typically practice 3-4 times a week and our practices include technical training as well as strength & conditioning. In addition to our practices, we host team bonding activities throughout the season and are actively involved in fundraising or volunteer opportunities. Christina is a New Jersey native in her seventh year as Head Coach at Loyola. She graduated from East Carolina University in 2014 with a B.S. in Sports Studies, and was a 4-yr member & captain of the ECU Dance Team. At ECU, Christina attended NDA Collegiate Camps where she was nominated by her teammates to be an NDA Collegiate All-American & Top Gun Leaps and Turner. She also competed at NDA's Collegiate National Championship in Daytona Beach, FL each year. During her time with the team, the ECU Dance Team finished in the top 5 of Division IA Team Performance. In addition to camps and competitions, Christina traveled with the ECU Dance Team to various football and basketball games including performances at the Mercedes Benz Superdome, Bank of America Stadium, Tropicana Field, and RFK Stadium.

Her fellow ECUDT alumnae & friends have gone on to dance for the Baltimore Ravens Cheerleaders, the Atlanta Falcons Cheerleaders, the New York Knicks City Dancers, the Boston Celtics Dancers, the Carolina Panthers Topcats, the Charlotte HoneyBees, and the NFL Pro Bowl. In 2017, Christina graduated with her master's degree in Sports Industry Management from Georgetown University to continue pursuing her passion for collegiate athletics.

Alexa returns to the LUDT for her third season, and second season as Co-Head Coach. Alexa has 25 years of dance experience anchored by her classical ballet training at the Washington School of Ballet in DC. She then joined her high school’s dance team in Montgomery County, MD where she helped lead the team to multiple county-wide wins as a captain. Alexa graduated from Wake Forest University in 2015 with a B.S. in Biology and minors in Chemistry and Neuroscience.  While at WFU, she was a 4-yr member and senior captain of the Wake Forest Dance Team and 4-yr member of the WFU Dance Company. Alexa traveled with the football team for two years, performing across the country at other ACC schools including Clemson, West Point, Notre Dame, Miami University, and Florida State.
​
In 2015, Alexa joined the athletics staff at her alma mater as the head coach of the Walt Whitman High School Poms Team in Bethesda, MD. Over her five-year tenure, the team won three annual county-wide championships, multiple invitational competitions, and moved from competing in Division III to Division I in 5 years. Her high school dancers have gone on to dance at Hampton University, Duke, University of Delaware, and Boston University. During this time, Alexa also began her medical school training and concurrently started coaching the Loyola Dance Team. Alexa is currently a graduate student at the University of Maryland School of Medicine.

Christina and Alexa are both proud members of the National Dance Coaches Association and worked collaboratively to establish the Maryland State Dance Team Association in 2021. 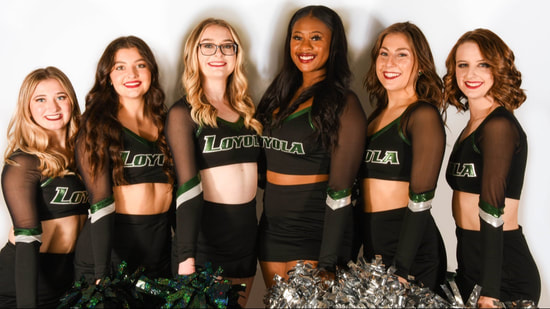